Bernard was kind enough to put together this excel spreadsheet with information about all of the mSG processors in Studio Artist V4.

It breaks them down by their IO routing.

I don't have Microsoft Office Excel on my computer right now, so i can't look at it directly. But he asked me to pass it on for people to download, and it is currently being discussed and examples of it shown in this image post.

Let me know if i need to zip compress it, i just tried attaching it first below.

I join you the processor files in pdf. Sure that it was adapted to my printer. So you'll find a complete list with and without borders so you can reconstruct yourself with excel files.

As you can imagine, it took me about 15 jours to made this list...

But MSG is a great tool, as the vectorizer or the paint synthesizer are. And I found it necessary to learn how they work. As a technician, I like to know what is in it. So actually when I use the MSG, I work on a paper, and draw it as a technical diagram, begin with a generator, then Input output processor, etc...

Then I realize it with SA. I open also the evolution editor : to have variations of the created preset.

Sometimes, when I found an interesting  'inspire mode generated preset', I analyze what each processor do. And here my list is a good help !

Remember also, that you can add paint effects if you choose the following set up in the MSG editor, composite output :

And in the paint synthesizer editor : 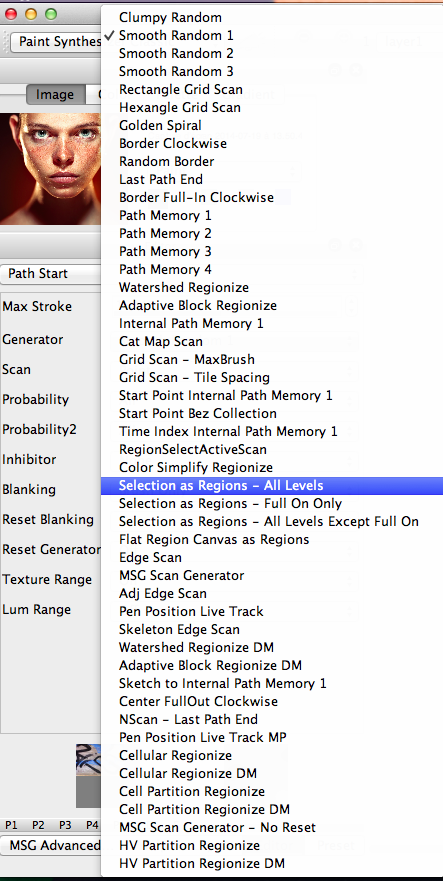 Hope you'll have fun, as I have...If you have any questions, we can all help you !

when I use the MSG, I work on a paper, and draw it as a technical diagram, begin with a generator, then Input output processor, etc...

You can tell us more?

Quick example of an MSG preset of hat I mean. I draw this on a paper because it's faster. Here I draw it with a software, so that you can see it better 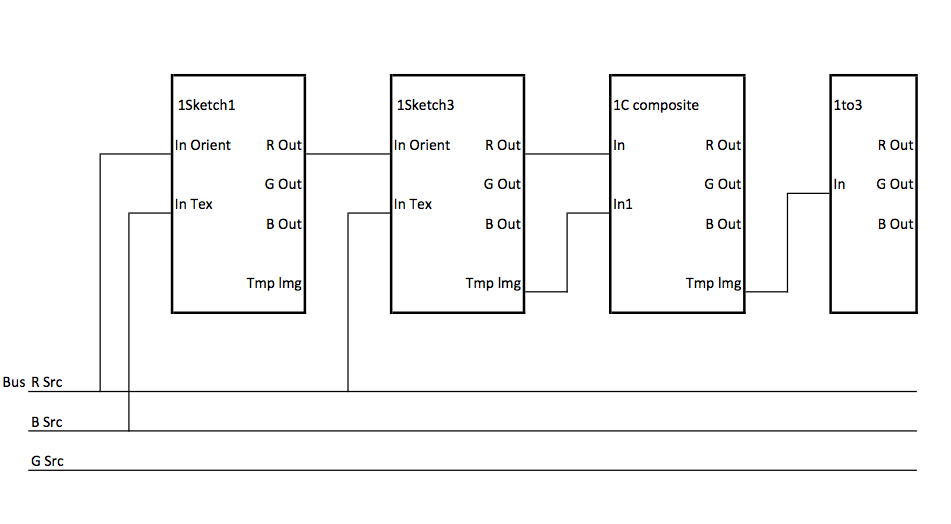 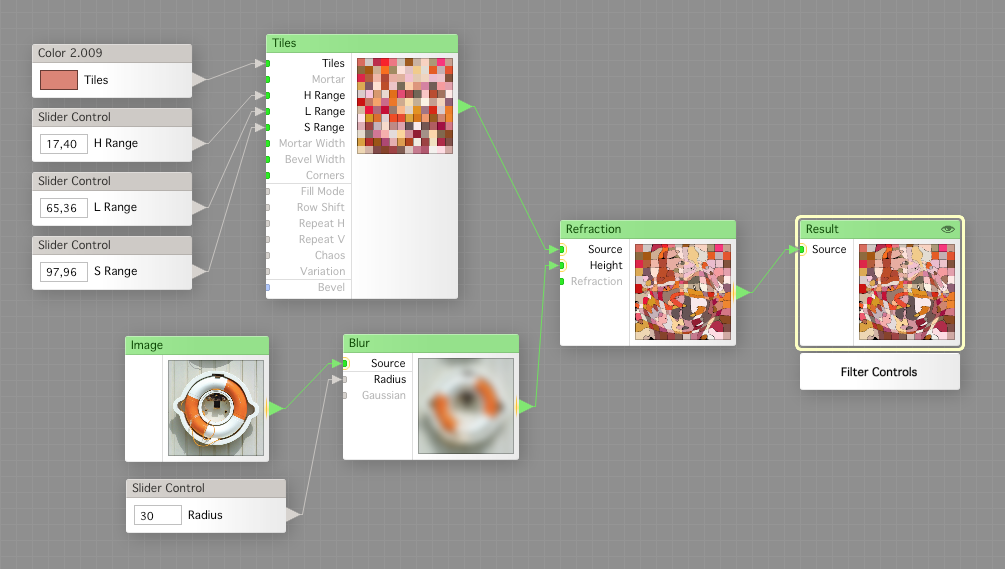 We've thought about making the IO editor part of the MSG advance editor more visually sophisticated. Kind of more like Bernard is suggesting above. So you'd see the full set of Bus connections visually, and all of the IO connections associated with the processor (from the Bus to the processor IO ports, and then back to the Bus again).

Because the way it is now, you do have do that full visualization in your head, since you just work with and see one IO connection at a time in the IO editor panel. Associated with just the currently selected processor.

The advantage of our existing approach is that it's very space efficient.

If we add a more sophisticated visual component, it will take up a much larger amount of real estate on the screen. But i do think it could make IO editing way easier for mere mortals.

i can do the visualization in my head, but i probably seem like Spock or the Borg to most people, kind of a severe tech geek.

Now, Bernard also showed an alternative nodal modular system below. And these kinds of nodal systems internally are using what a computer scientist would call a tree structure (as opposed to a list like we use) to define the overall modular processing architecture.

Would it make sense for MSG to be edited with a nodal editor?

Every time i think it through, i come to the same conclusion, it would actually be a really bad idea. For 2 reasons.

The order of individual module processing in a nodal editor is oftentimes not obvious to the person doing the editing. usually it involves some kind of left to right, up to down module positioning rules. But it's often times kind of unclear. What is the order of execution for the individual modules?

This is very important in MSG. Changing the order of execution of the individual processors could totally change the effect it was producing. So if you dragged the nodal modules in that editor to different positions in the 2d visual image, even though they are connected exactly the same, the effect they would generate could actually change. It certainly would be the case if you were editing MSG that way. So that would be very confusing to people.

Seeing the MSG processors positioned in a list, and editing them that way (in a list), makes that processing order very clear. The individual processors are executed in order, one by one, from top to bottom in the list. So they work like every other list in Studio Artist, the individual steps are run in order, from top to bottom. Consistent behavior across the entire interface of Studio Artist.

There is no confusion about it when the processors are edited in a list editor.

It's inherently obvious, because you see and visually edit the processors in a list.

Second, MSG works very different internally than a typical nodal tree-based module data structure that these other nodal modular editors use. They work by running the complete nodal tree-based processing on individual pixels, one at a time. So each individual pixel is processed through the entire tree-structure of modular processes. Then the program moves to the next pixel and does the same thing.

Or another system of this type might use a very small buffer of pixels to try and speed this up, since what i just described could be very inefficient speed wise. So they use a buffer of 16 or 32 pixels, and run that through the tree structure of individual modules. Then repeat that process until they get through all of the pixels in the complete image for the processing.

So, if we let people construct any old nodal processor tree they wanted to, they would probably construct some real crazy complex ones pretty quickly. And then the software would have to translate that tree structure into an actual list for processing. And we would then have to internally create all kinds of additional temporary full image buffers to pull that off. Because the nodal editing structure and how MSG really works internally would require it. Which could be a huge memory inefficiency.

The way it works now it's very clear what is happening. How many image stream buffers are being used. And you can reuse them very efficiently across the full set of processors that generate the complete MSG preset effect.

So nodal tree based modular editors would allow a user to get into trouble very easily, and the actual order of module processing would be very confusing to understand in that kind of editor.

Because these other nodal system work the way i described, it's trivial for them to create little keyframe views of their processing at each module's output, since they are actually processing individual pixels, or very tiny image chunks. It's a little more involved for us.

Adding a way to see the individual output of each processor would be very useful, and we have thought about it.

Our thinking was more along the lines of some way that would allow you to select individual processors in the processor chain editor,and then see what they were outputting in the preview view. As opposed to the preview just always outputting the final complete effect processing.

i use the mute checkboxes to do that kind of visualization manually now. With maybe an extra 1to3 processor i temporarily turn on of off as i do this individual processor output visualization. but a nice easy to use way to do it automatically would be much better.

Thanks John for your explanations and point of view. We already discussed about it :-)

Sure that line presentation is cooler and quicker to understand how the preset works.

......but I would imagine an EDIT/PRINT button, that draws and visualizes the complete MSG preset as a technical diagram a different way as the line presentation :-)

But, I suppose that I'll be the one who will be interested by this option.....

is it possible to make the entry of mathematical formulas to MSG?

I think MSG is complete and complex enough. Don't need to add math formulas unless you're a math teacher ? :-)

Sure, MSG has a ton of them already built into various MSG processors. And we hide all that internal math from our users.

But as i said above, we are thinking about ways to offer than fine level of control for people who are just dying to be able to do it. And it would probably benefit us as well, because we could create new MSG presets using that as feature as opposed to me having to code it all up internally to some new processor.

Richard Page replied to Richard Page's discussion Could the SA Weekly Challenge make a comeback?
"Added a image of from one of Jack Vettriano's Photo shots. This is the cover of his book, Studio Live."
3 hours ago

Richard Page replied to Richard Page's discussion Could the SA Weekly Challenge make a comeback?
"Sorry I don't know. Sorry, but I don't know your name? I want to say thank you for your prompt reply and fascinating comments. It is accurate that knowing how and why a piece is created makes the piece more. This is true for all forms of…"
5 hours ago

Synthetik Software replied to Richard Page's discussion Could the SA Weekly Challenge make a comeback?
"Bringing the challenge back would be fun.  So yeah, it's a great idea.  The idea was that you would pick some piece of that you thought was cool, analyze what the components of it's visual style were, and then try to implement…"
22 hours ago

Could the SA Weekly Challenge make a comeback?

I'm new to SA and really having lot of fun drifting. I think SA is the best bit of digital painting kit out there and has so much potential! The Rotoscoping thing is amazing, but I'm only into static images and printing.I like the idea of developing styles, and think SA is prefect for this. There is so much, that it becomes a bit overwhelming, so I'm slowly trying to reduce the process and get to understand the Basic steps. I don't want to just keep producing one of images that are more guess…See More
yesterday
3 Comments

From the Book of Phonetic Facts- The Yosemite Quadruplets