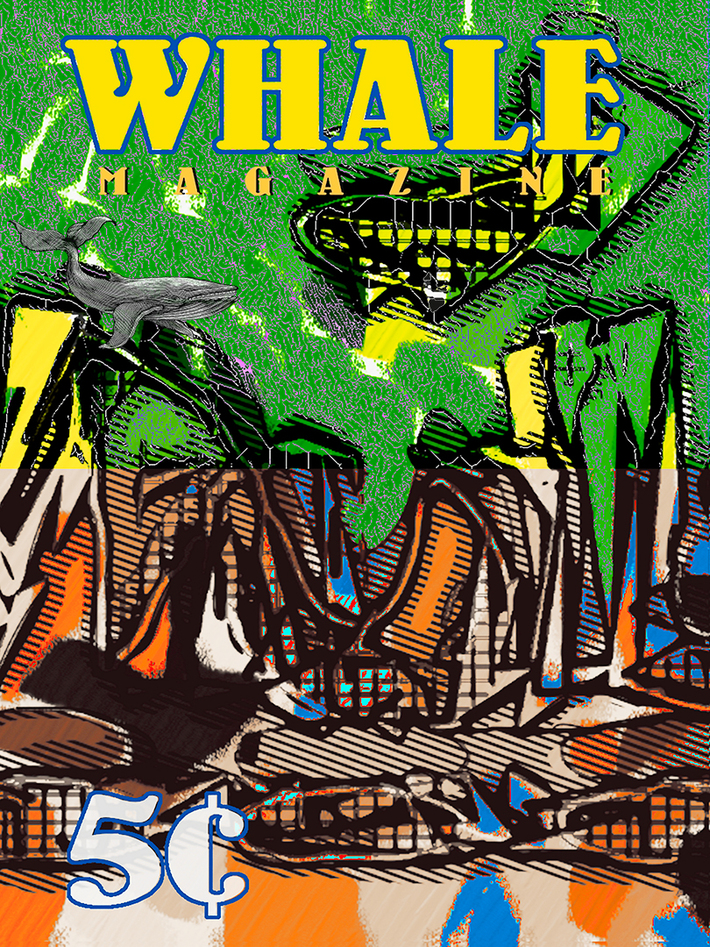 A little known fact is that Herman Melville dreamed of starting the first and only magazine devoted entirely to whales...Instead he got sidetracked and wrote his classic, Moby Dick...Don't believe me? Hehehe...Just ask Donald Trump... He knows Truth
In honor of Herman I designed this magazine cover

I'm curious if the approach you took to making it could be output as SVG vector graphics.  If that was the case, then the entire thing would be resolution independent.

If your approach is not directly compatible, we might be able to analyze it and edit some modifications to the presets to get there.

Thanks John...This is not an SVG. I started with the last type treatment I did here and created a dedicated folder to run the Gallery show with that one image only...That way I have more control over variations from any particular image. (if I like any particular result during the process I stop Gallery Show and save the Preset to Favorites) I also use other Presets...In this case I found one for oil painting that gave me great broad paint strokes. I think in was from SA Version 3. I layer my images and try different options for each layer and the image started to take shape. I also took one result from the layering that I liked that had one complete set of colors throughout and selected half using the rectangle selection, chose Hue and changed the colors of half the image. Fortunately I was able to select areas to get rid of the straight line of the base of the rectangle. This may sound complicated but I just try and try to I get results I like. Being a designer helps me make refined intuitive choices for composition.  I particularly like wood cut effects. Sometimes I will choose an image and use Smart Bw Threshold to get a wood cut effect and then I layer it on top of the derivative color image.

I will take this image without the type and see what I get when I use vector presets on it. I will send it to you once I get something,

Paul this too is a classic, and a great honor to Herman ...

Thanks again Les...From what I have been told, Herman received no acclaim in his lifetime. It too Faulkner's statement that Moby Dick was indeed a classic to popularize it...certainly Van Gogh understood...

I had sent you files regarding this piece. Did you get them? Ant status on being able to output it as a vector file? Also did you upload a new preset for the type on a line? I have not been able to find it. Thanks, Paul

I did get the files. So i'll try to take a look at them later today.

For the type. Are you looking for something where you draw out a straight line and then it draws the text on that straight line? Or just text following any path?

And are you ok with raster text? Or does it have to be vector?

Thanks. I would like type on a straight path with the option of letter spacing. I have looked for a way to space the letters and haven't figured it out.  I prefer to have a choice of vector or raster. This also opens up a whole new line of questioning. I have tried to output vector that's faithful to my source image. I have tried type alone, simple geometric shapes, etc and there is always distortion and changes within SA  from the vector presets and for SVG output. Type gets totally destroyed. Can something be done about this?  I love the rough look of the color translations. I have looked at the SVG outlines in illustrator and am amazed how complex and numerous the vectors are. Being able to simplify that would be a gift.

So i think what we need to do is add a new feature to Bezier Operation Mode. So that you can enter text there. Either as bezier regions, or as text on a bezier path (which will still be regions, but laid out along the original bezier path).

I think this makes sense as an alternative to the paint synthesizer.  I'm collecting together all of the various text brush presets we shipped over the years (V1 - V5).  Most of them deal with text as a cool way to generate a Brush Source image that is a paint nib. So thinking about it from a paint brush standpoint where text is just another interesting brush shape.  As opposed to text layout.

So the text draw option in Bezier Op Mode would be a text layout approach.

All of the various issues with the font kerning would go away in this approach i believe. Because it's rendering the complete text as an entity. And we could have to render it directly into the raster canvas layer. Or render it into the bezier region(s) associated with the text draw operation performed by the user.

Does this make sense? I've added it to the short term feature list for the new stuff we are working on.

One thing to be aware of with vector file output (or vector drawing for that matter) is that the generated paths could be bezier paths, or straight line segments. Anything that started out with a straight line look is going to be softened when it is converted into bezier paths. Both the vector paint settings and the Vectorizer Draw control panel settings allow for a different options for the bezier conversion. Tighter, or looser, or straight line only. So you want that last one if you really want straight lines an only straight lines.

Though I am not involved with rotoscoping those of you who are may find this interesting.See More
2 hours ago
0 Comments

There are already a ton of different automatic preset generation features in Studio Artist. They include:1: Preset memories that record and playback all of the editable settings associated with a preset. And for the paint synth, preset memories that just record and playback editable settings associated with specific high level attributes of the preset, like path generation only, or brush settings only.2: Morph and Mingle commands that work off of 2 or more preset memories.3: Randomize…See More
yesterday
0 Comments

mark g replied to morales's discussion Studio Artist Workshop
"yep, pubs restaurants etc have only just started re opening across the UK, albeit in very complicated ways..forms to be filled in etc.. no sign of live music, theatre..yet"
Monday

mark g replied to mark g's discussion new installation of SA query
"ok, I'll just have to bite the bullet and get a new machine.."
Monday

Synthetik Software replied to morales's discussion Studio Artist Workshop
"Yeah. I guess we'll be asking that question about a lot of things i just took for granted for quite a while. Like live music concerts.  "
Monday

Synthetik Software replied to mark g's discussion new installation of SA query
"One thing you should be aware of. The next update we do is going to require os 10.15 Catalina or later to run on the mac.  We wasted a lot of time trying to support older mac os versions, and had to drop all of that to avoid endless…"
Monday