Is there any Paseq that generate this:

I want to make line draw SVG/EPS like this: 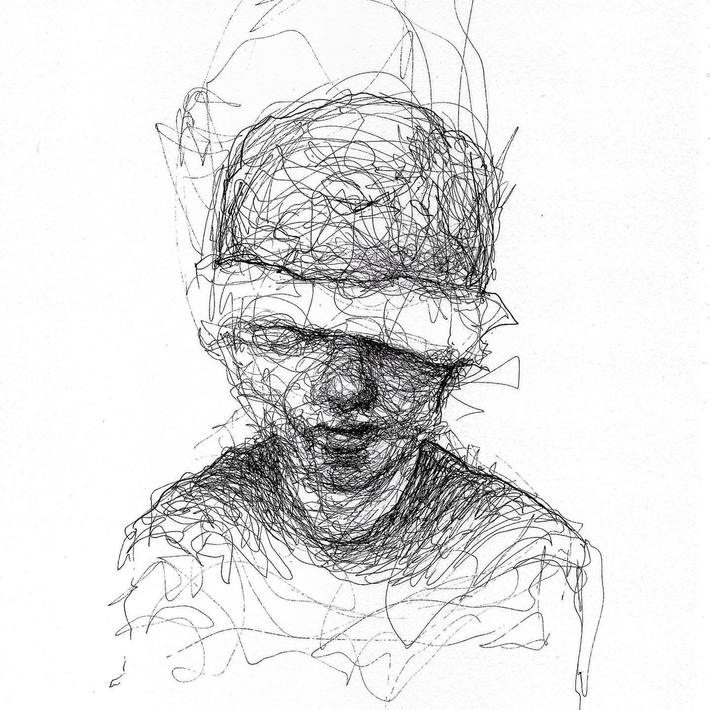 Do you any tips and tricks for generating this in vector?
thank you

Just looks like a paint synth preset to me. So you'd need to set up the paint synthesizer to use vector paint only. Build a strategy of what features of the image you want to accent, and then edit that in the paint synth.

If you use a 100% solid line (no transparency), then you can generate something that will work for eps and svg output.

I know we've included presets for this kind of thing in the past in factory preset collections.

I'll try to put together a tutorial that shows a few different approaches to making this kind of thing.  That covers what i briefly discussed above. Approaches that work for eps/svg output.

This is a paint preset, Would you please optimize it:
Scribble_line

The sample now is a rectangular scribble but I want portrait (with only curve lines not pixels). In some parts it generates pixels.

Is there a reason why you built it as a path start regionize paint preset?

That's an integral part of why you have the rectangular scribble.

When you say 'portrait', are you saying you want the source image to be better represented in the final scribbled drawing?

But you still want just one continuous path?  The example you posted does not have this.

I think i would have chosen to program a different drawing strategy, but i want to understand what you are trying to achieve with the choice you made. Before i just start posting changes.

So the discontinuities in the rendered path are caused by your use of the Procedural 1 Random Displace 1 option in the Path Randomize control panel.  If the pen point path has gaps greater then 2 pixels, the point path to bezier path conversion is going to fail.  So it breaks off as separate paths because of that whenever that happens. Many randomizers will generate large pixel gaps in the point path.

You probably want to be using one or more of the Visual Error modulators to build in the luminance reproduction you want.

I want regenerate just like the sample with only one continuse line.

Is it possible to force SA starts from top/left, Draws and finish the line just in the lower left corner?

Again, when i look at it i don't see one continuous line. I see multiple dangling ends, and a lot of break up in the path at different places, which means it splits there as well if it's really drawing vectors.

Anyway, i think i understand what you are looking for now. I'll see if i can come up with some different approaches for you.

So interesting experiment. Is the original sketch from the drawing from the right side of the brain book? It looks familiar to me.

So making it a single vector path precludes some paint synth features that would be useful for this.

One approach is to try and build it as a TSP (traveling salesman problem), which again limits your options in the paint synth some right now. I can add some more features to make it more controllable using a non-path start regionize approach, which is what i had to do for right now. The contrast of the source image is really critical for this kind of thing in general, so you will probably need to work with it to get the paint density and features you want in the drawing. You can use the Bias/Gain Interactive Adjust to modify your source image appropriately.

I tried a MSG approach. Again, you are going to have to play with the contrast density of the source image, and work with the # Shape and # exchange parameters in the 1C Abstract6 MSG processor to dial in a look you are willing to live with.

The 2 presets i used for the 2 examples are attached below.

Again, a very useful example to work through for me. I can see a few simple modifications i could add to the paint synth to make this kind of thing easier to work with. 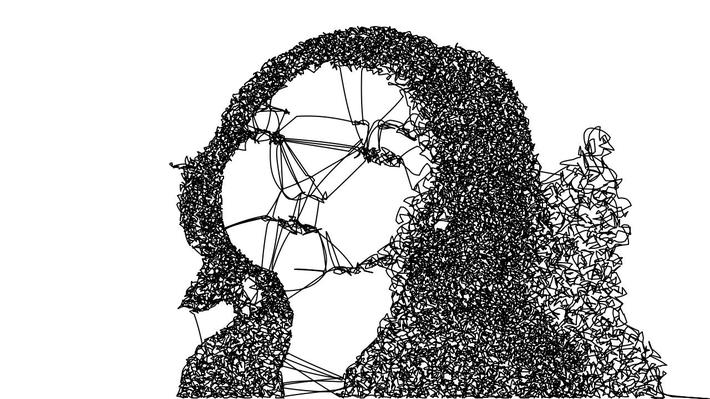 So, if you can live with a tighter scribble, and more thresholded look, you can get a more defined image without too much playing around with the source image density.

thank you I will check it.

So i was hoping that there was a way to do what you want using time particles in the paint synthesizer.

I couldn't quite get there yet. But it gave me a bunch of ideas for new time particle features that should definitely get you there in the next release. So a big thanks for asking the question, it stimulated some new developments here that will lead to new Studio Artist features.

So what was i able to generate with this approach? Well, it's kind of a journey. Which is going to be the case any time you are trying out a new idea.

These are kind of fun to run through in order of discovery. I started out just running the time particle paint preset using loop action. At some point i switched to a PASeq that had the time particle action paint step in it along with things at the beginning to erase the canvas to white for first frame, and then maybe fade it over time if you wanted to try and build up a solid shape.

There are a very limited set of controls i'm working with for these. I started with raster paint, but pretty quickly moved to vector since that was what was wanted for the starting example in this post.

Note that i was trying out different path start inhibitor settings over the course of my voyage below.

I also started working with the path Application Probability drop out options, working with the ones associated with visual models. So they (or other settings like them in the paint synth) are essential for getting the halftone like appearance of the later images in the sequence. 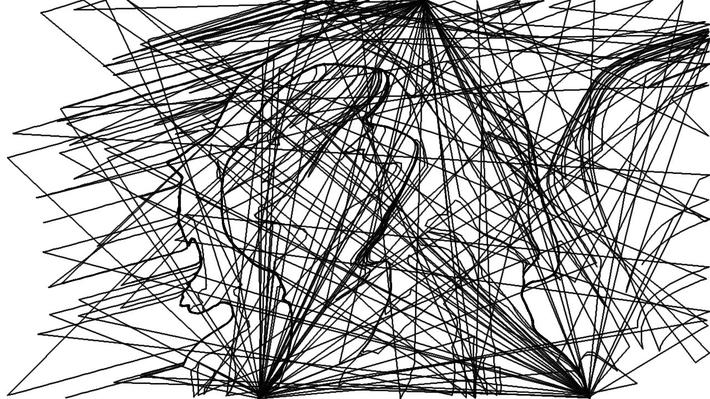 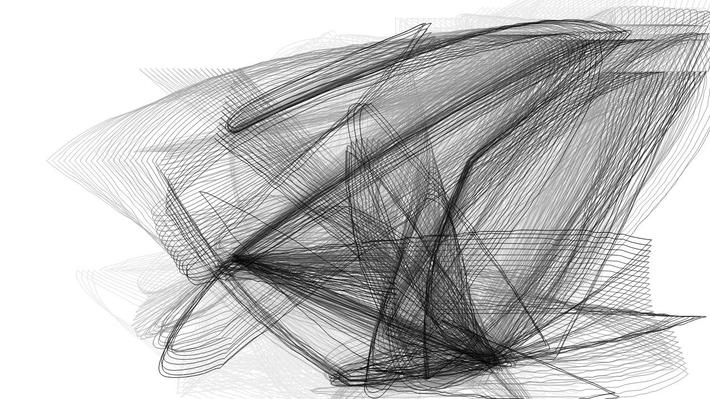 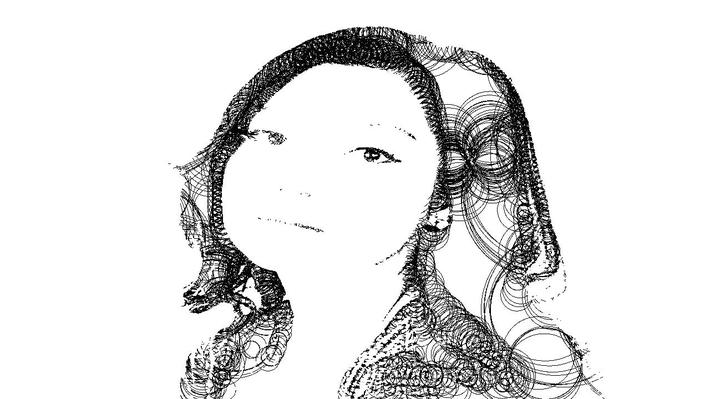 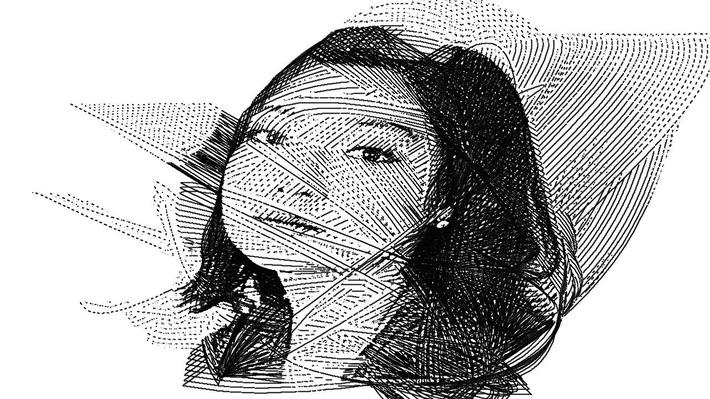 I attached the PASeq preset for the last one below.

I didn't use any of the Swarming parameters in Time Particle 1 control panel for this.

We want to extend what you can do with the Swarming section by introducing a new Visual Model Swarm.  This will allow you to swarm the particles in a way that reproduces the source image visual characteristics, and i think is one of the key things to make this more useful for what is proposed in this post.

That and adding the different sort options we provide for path start generators like the Advanced Watershed regionizer. The sorting will happen to the time particle objects. By sorting their order, you can change the characteristics of what can be drawn by them.

I made it again and again but I can not generate a manual pencil like draw, In this preset I tried to forced to draw only inside the region selection that generated by vector function but Why SA draws outside too?line_portrait_F

"Looks like you found some of the new SA V5.5 visual attribute modulation options in the Vectoizer. I was running randomized variations of Vectorizer parameters last night in gallery show, and it needs to have some generative preference options…"
3 hours ago

"This is no SA-work! These early digital works were made by my old typography-professor alfred tilp (1932-2006)."
6 hours ago

This was made using a generative art strategy that only uses the Vectorizer in Studio Artist V5.5 while testing some new Vectorizer features.
22 hours ago
0 Comments

"This is a really good example of how perceptual modulation of diverse sets of different paint synthesizer parameters can really tune what is happening in the canvas.  This applies to realistic painting goals, or to abstract painting…"
yesterday