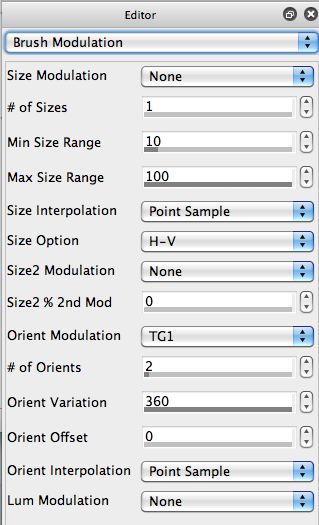 Since we want the brush to change orientation by 180 degrees with every paint nib, we want a square wave modulator with a cycle time of 2. We're using a max path length of 1 for this preset, so each paint stroke paints in a single image brush paint nib. So, we want the temporal generator to advance based on the stroke count (as opposed to the current frame or path length). The paint preset i used to generate the tiled image above is available for download below.

One thing to be aware of with tiling presets is that they may generate an extra tile at the far right or bottom edges of the canvas. So if your canvas size is an exact multiple of the image tile size, you get a duplicate tile nib drawn at the right most border tiles. Normally this would not be a problem, but for this particular preset it messes up the successive tile flipping. The solution is to make the canvas slightly bigger in the horizontal dimension. You can then crop the final painted canvas to get rid of the extra partial tile spacing at the right boundary for the finished output image.