Flow from john dalton on Vimeo.

Another experiment working with dualmode paint presets in Studio Artist to create generative abstract animation. All of the segments are based on time particle painting in conjunction with MSG geometric transformations encoded in dualmode paint presets. Some of the individual segments have 2 different dual mode presets going simultaneously, one painted directly on the canvas and the other streamed to the selection buffer to modulate an interactive warp applied to the painted canvas. You can use a content context action step in a PASeq to work with multiple movie files in a single PASeq.

could you provide a tip with more specifics on how the second dual mode is streamed into the selection buffer and on how to use a content context action to work with multiple movie files. Thanks 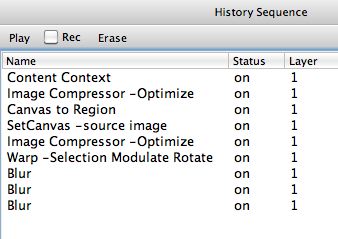 The context action steps key off of what is loaded as the current source image (unless you use the multi key options, which bring up a find file dialog to select images(s),movies(s). So i first loaded the movie i wanted to modulate with as the source. I then ran the Action : PASeq Timeline : Record Context : Content menu command.

I then loaded my main source movie. I dragged the source to the canvas. I then ran the image compressor to optimize the movie frame. I then ran an interactive warp using the 'selection modulate rotate' option. I then ran 3 blur ip ops with the edge composite setting to multi-scale enhance the canvas.

The 2 movie files i was working with were generated by running dualmode paint presets with loop action, recording the live painting into an open movie stream. The dualpaint presets used were based on a time particle paint synthesizer preset and a msg geometric transformation. The paint preset drags the original time particle start color.

What initially got me thinking about the use of a second movie file modulating the first movie file was that i wanted to subtly break the symmetry associated with the msg geometric transformation in the dualmode painting canvas (left-right horizontal symmetry). The movement added to the flow from the interactive warp modulation does that.

If the context step keying off of the source reference is confusing, you can use the multi key menu commands and use a find file dialog to select an image or movie file. Those menu options were initially put in to select multiple images or movies that get placed on consecutive keyframes. This is useful for selecting a series of images to build a warp or morph context. But you can just select a single one if you want.

Here's a link to some tips on working with context action steps.

Comment by Synthetik Software on September 18, 2010 at 8:31am
I should point out that the PASeq show below was used for the first segment of the animation. Each section used slightly different processing steps. Some of them use selection translate warp, and the particulars of the enhancement steps are different for each section. Some of them warp themselves as opposed to using a second movie modulator.

Comment by Synthetik Software on September 18, 2010 at 8:44am
The source i used for the original dualpaint animation movie stream runs was a series of movies i was working with initially for stack filtering experiments. So each frame is a different image, actually a series or temporal rank filtered frames generated by temporal image processing an initial stack of images for this particular experiment. I manually changed frame locations as the live dualmode paint animations progressed. I also tweaked the msg processor parameters live as the paint animations streamed out.

Comment by liveart on September 18, 2010 at 9:24am
My mind is swimming trying to follow the quaternary iterative process. Create a stack-live stream a dual mode paint animation of the stack - twice- use one of these as source and the other as a modulation agent in a PASeq which includes an interactive warp.

thanks for explaining though. I will give the content context bit a try later.

Comment by Synthetik Software on September 18, 2010 at 10:27am
You could use anything for a source. I've been fooling around with stack filtering recently, so i was using stack filtered output movies as my sources, but that's not an essential part of what's going on in this animation. So don't get too wrapped up in that part of my particular 'process'. You could be using anything that works for you as a source for coloring for the time particles.

I was fooling around yesterday in another animation with switching back and forth between a movie source and the fixed color picker as the paint animation streamed out. Part of the time i was working with specific frames, then later i turned on 'movie loop action advance' and had the movie frames automatically play forward.

Part of what i'm trying to do with these recent experiments is work towards building a visual vocabulary for constructing these kinds of abstract animations. Forcing myself to try new animation experiments every day is a part of that process.

that's an extraordinary piece, John! Congratulations. I wish I had your incredible expertise.

Comment by Hulagirl on June 12, 2011 at 9:18pm
Check out the video that explains how to do this here  It's super easy

"Splendide: BB in the house, back to school, Quadratisch-Praktisch-Gut;-)"
41 minutes ago

Paul Perlow replied to Ian Clegg's discussion Mosaic - How to change text?
"Welcome back, Ian Go to the Brush Source settings in the Edit Panel If it is set to text you can just place the text you want in the appropriate panel. Paul"
2 hours ago

"These are all amazing."
7 hours ago

Ian Clegg replied to Ian Clegg's discussion Mosaic - How to change text?
"Thanks Sam. The YouTube video explained it all.. thanks very much! "
9 hours ago

Sam replied to Ian Clegg's discussion Mosaic - How to change text?
"Do you mean this: https://www.youtube.com/watch?v=1hqqi9C5F-0"
10 hours ago

"I am happy that with the 64-bit version, we will probably be able to produce something similar to Deep Learning even before the completion of version…"
14 hours ago

"omment by Bernard Bunner 32 seconds agoDelete Comment here I used the texture synthesizer as source for the vectorizer. A new source option in the vectorizer. The result is different as you use a texture saved picture as a source. Each change in the…"
15 hours ago