Comment by Synthetik Software on September 10, 2010 at 12:12pm
There's a tutorial video available here that shows off recursive vs non-recursive processing and how it affects the resulting visual appearance of a generated paint animation. The tutorial animation example is split into 2 parts, both generated with exactly the same individual PASeq action steps. The first half has all of the action steps in a single PASeq. The second half was generated by using half of the overall processing PASeq action steps to generate an initial paint animation, that was then loaded as a source movie and subsequently processed with the rest of the action steps in a separate PASeq. Note that there is some recursive processing occurring in the first generative pass, so the example focuses on taking the series of enhancement action steps at the end of the original PASeq and splitting those off to process non-recursively.

The PASeq i used to generate the SurfDrip animation above is shown below. 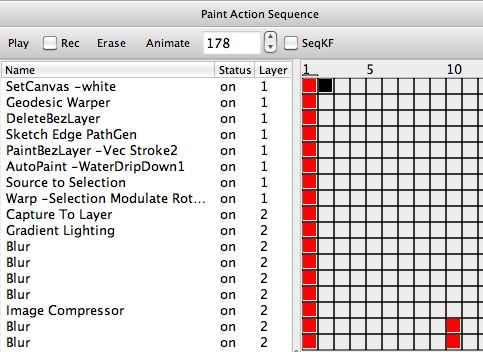 Note that the PASeq uses 2 different layers. SInce i want the layer playback to happen when the PASeq is used to process a movie file i needed to turn on Layer Playback in the Editor. 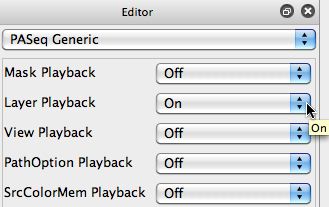 Note that there's 'Capture to layer' action step in the middle of the PASeq. I built the PASeq using layer 1 as a canvas for building the recursive part of the paint animation processing, and layer 2 for the non-recursive part of the paint animation processing. So note that layer 1 is set to white at frame 1 and then is never erased after that. painting occurs in layer 1 by overdrawing on top of a previously modified canvas. So the recursive painting effects build up over time in layer 1.

Layer 1 is then copied to layer 2 for every output frame. After the copy, additional enhancement processing is performed on layer 2. Since the layer 2 image is updated each frame, the processing taking place in layer 2 is non-recursive.

Comment by liveart on September 10, 2010 at 4:20pm
John I have been playing with this Idea a bit, but I am having trouble with the capture to layer command.
I does not seem to transfer layer 1 to layer 2 for me. Is there another setting that I am missing?

Comment by Synthetik Software on September 10, 2010 at 4:47pm
The menu command is Canvas : Layer : Capture View to Current Layer. So you need to have layer 2 as your current layer when you run the command, and you need to be seeing layer 1 while layer 2 is the current layer. One way to do that is to use View All layer view mode, and have the % blend for layer 2 set to 0 when you run the command.

PASeq action steps in Studio Artist 4 store the current layer % blend and composite settings, and will play them back if the PASeq Layer Playback option is turned on.

The layer View status is not played back from the PASeq unless the PASeq View Playback option is turned on. I left that turned off for this animation and just manually set the view to View All when i ran it.

Comment by liveart on September 10, 2010 at 6:26pm
I think I understand. If I am correct a Fixed Image imop that worked on layer 2 but had as its source layer 1 should do the same thing as the capture view command without the blend to 0% gymnastics. The sketch edge path gen and vector stroke2 operations along with the delete bez layer are responsible for the low "flicker" in the animation, because you are controlling the paint to the paths generated by the sketch imop. Did you make any adjustments inside that imop to further reduce the random effects, such as specifying use seed in the random parameter? I am not clear on what effect the selection modulate rotate warp is having, or why, since you specify the source as the selection in the prior step, the self modulate rotate warp wouldn't have sufficed and saved a processing step.

Comment by Synthetik Software on September 11, 2010 at 7:26am
Yes, Fixed Image ip op as you describe it is another approach to doing the layer transfer. I was thinking last night that i should have explained that was another way to do it.

As far as flicker or lack of flicker goes, most of the 'painting' in the animation comes indirectly from what is happening in the recursive process going on within layer 1 (as opposed to being directly painted in with a specific paint preset). The edge sketch is directly painted in for each frame but that actually covers a small part of the overall canvas. It's a good example of how to build temporal continuity in an animation (in this case by overdrawing on top of a modified previous canvas). Temporal continuity from frame to frame is what give you a lack of flicker in an animation. Lack of temporal continuity from frame to frame is what generates flicker.

So the recursive process going on in layer 1 from frame to frame causes the relatively small amount of paint being painted at the edges of the imagery in the frame to spread out and cover the entire canvas in a visually interesting way. There's a few things going on to do this. The geodesic warper ip op acts to spread out the existing painted canvas prior to painting in the edge sketch. After the edge sketch is painted, dripping water is applied to layer 1 with another paint preset that simulates a wet paint process dripping down with associated color mixing and softening. The 2 step selection warp step also adds some additional source specific directional components to the flow( i talk about this a little more below in answer to your question about it).


The Sketch Edge ip op is generating the paint paths. It's the basic default startup setting for that effect, i didn't spend any time trying to work with it.

As far as the 2 step selection warp, i'm warping the layer 1 canvas with the source as the selection (which means the source is modulating the warp). This part of the processing is kind of subtle, it helps define the paint flow that occurs within layer 1 from frame to frame as a result of the overall recursive processing within layer 1. Modulating the subtle rotation warp based on the source gives an adaptive warp effect that makes the paint flow seem to track the source imagery better in the overall animation. Self modulate rotate warp would warp the canvas with the canvas as the source, which would look very different (it would accent the features in the painting rather than the features in the source, adding another internal recursive processing loop).

Comment by Synthetik Software on September 11, 2010 at 7:29am
I should also point out that the Blur ip op steps are doing enhancement and edge sharpening operations, so they aren't 'blurring' the canvas.

Paul Perlow replied to Ian Clegg's discussion Mosaic - How to change text?
"Welcome back, Ian Go to the Brush Source settings in the Edit Panel If it is set to text you can just place the text you want in the appropriate panel. Paul"
1 hour ago

"These are all amazing."
6 hours ago

Ian Clegg replied to Ian Clegg's discussion Mosaic - How to change text?
"Thanks Sam. The YouTube video explained it all.. thanks very much! "
8 hours ago

Sam replied to Ian Clegg's discussion Mosaic - How to change text?
"Do you mean this: https://www.youtube.com/watch?v=1hqqi9C5F-0"
9 hours ago

"I am happy that with the 64-bit version, we will probably be able to produce something similar to Deep Learning even before the completion of version…"
13 hours ago

"omment by Bernard Bunner 32 seconds agoDelete Comment here I used the texture synthesizer as source for the vectorizer. A new source option in the vectorizer. The result is different as you use a texture saved picture as a source. Each change in the…"
14 hours ago