I got inspired by Liveart's recent video posts involving using time particles with MSG geometric transformation processors. So i've been trying some variations on the idea.

Comment by Synthetik Software on September 7, 2010 at 10:07am
Here's a link to liveart's city traffic video that inspired me to play around with time particles and MSG geometric transformations to build a paint animation. 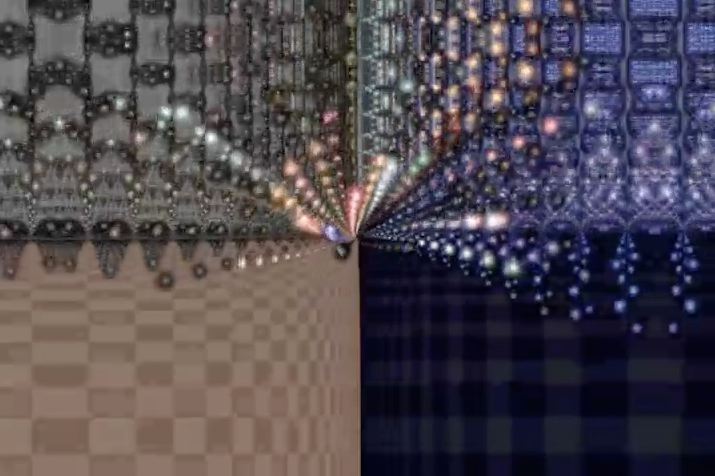 Note that the visual effect of recursive vs non-recursive processing when using a geometric transformation is very different. I'll post a link to a video example a little later after it uploads.


I also wanted to point out that the creative approach i was following when working on what lead to this paint animation is very similar to the Darwinian or evolutionary model of creativity recently discussed in the 'what is creativity' forum post. Creativity being thought of as a 3 step iterative cycle of Copy - Modify - Evaluate and Select.

I started by copying Liveart's approach to building a paint animation from using time particles and geometric transformations in a dual mode preset. I modified what he was doing, editing both the time particle paint preset and the MSG geometric processor and it's associated editable parameters. After modifying my 'copy', i evaluated the visual results of the kind of paint animation that was generated by the underlying process. I continued this iterative cycle over time until i ended up with the paint animation above.

Note that the notion of 'copying' initially was occurring at a meta level, i copied the idea Liveart was using to create his animation but not the specific presets he was using. But once i had a specific set of presets i was working with, my copies were much more literal, being edited variations of specific dual mode or PASeq presets i had generated.

Comment by Synthetik Software on September 7, 2010 at 10:54am
I also wanted to point out one paint synthesizer feature i'm using with my time particle paint preset used in this animation. I wanted the original time particle coloring to not change as the paint animation progressed. So the individual paint time particles would have the same color as they moved around over a series of frames. To do this, you can go to the Paint Source Offset control panel and edit the Tracking so that it tracks the Time PArticle Start Point. If you have a static image as your source, then the time particle coloring will always reference their start color from frame 1 when this Tracking option is turned on.

Andreas take this shot in my studio, must be middle of the 90s or so. If someone'sinteresting in his awesome flashlight-technique: more infos and links via my tumblr-blog.Andreas is one of the most supercreative and multitalented guys i met...See More
6 hours ago
0 Comments

I like the refreshments and cosmetics of the synthetik-site:(The language pulldown menue to the autotranslation did not work for me on Iphone.)Thinking on corporate identity, i would like to see this stylesheets also here the SA userforum.thanksSee More
19 hours ago
0 Comments