Many of us have the need to upscale the resolution of SA images, eg from 1000x1000 to 6000x6000 pixels.  But that task is very demanding, since the second upscaled image will have 36 times as many pixels as the lower-resolution image.  How can sharpness etc be preserved?

Before now, my go-to program for this kind of task was Photozoom Pro 7, which worked as well as anything else I'd tried.  All such programs work by interpolating new pixels in between the initial ones.  However, this new program, A.I. Gigapixel, works on a completely different principle.  It uses an artificial intelligence neural net that has been trained over many thousands of previous pictures, so that it knows, just from a few initial pixels, which actual object configuration was most probably represented by them.  Then, in the final image, it replaces those few pixels with a high resolution image of the object configuration it has guessed.

Quite honestly, I'm amazed at how well this works on typical images--I haven't been able to fool it yet into representing the wrong actual configuration, and I've never seen such sharpness in results before either.  As a quick test, see the sample picture below of the same highly magnified area from 2 upscaled 1000-->6000 pixel images, with the Gigapixel result on the left and the Photozoom Pro 7 one on the right--there's simply no comparison.

A.I. Gigapixel has only just been released--yesterday there was an intro webinar with many examples, follow it from my link at 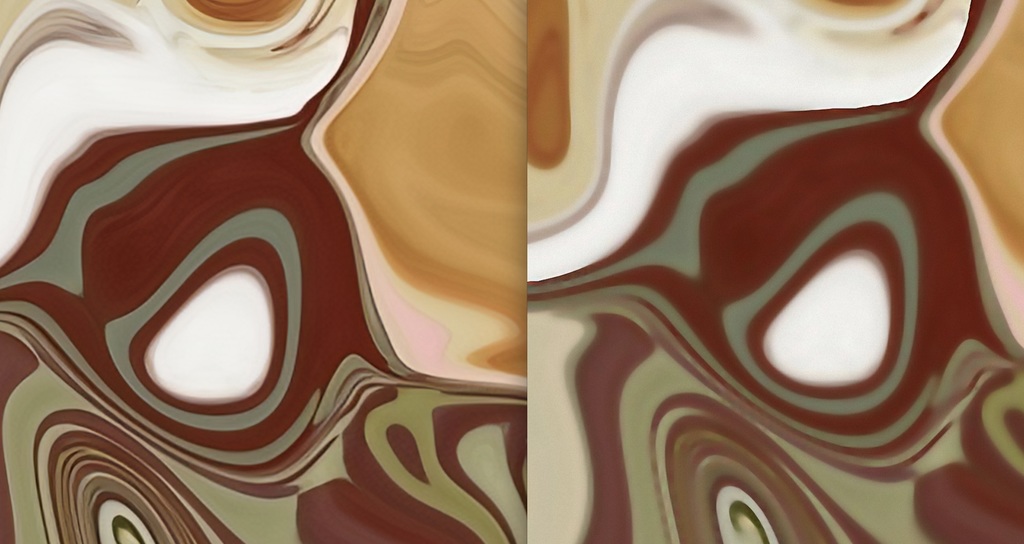 Also this is time-sensitive, because Topaz are offering 20% off the price only until the 27th of this month, use coupon name ‘GigaGreg’.  A free 30-day trial is also offered, which is how I've been able to test it so quickly.

thanks for your note on this, sounds interresting

Thanks Max, I hope you'll give it a try--seeing is believing!

Have you tried ON1 Photo Raw?

I have found the results incredible.

Thanks Paul, I do have ON1, but haven’t tried the Resize module yet—glad it works so well for you.  But Gigapixel is a completely different beast.  Another example:  I have a medium resolution (4000x) image with some imperfections.  If I downsize it to 1000x, then upscale it back with Gigapixel, the result is BETTER than the original—the imperfections have been removed!  No conventional upscaler could do that.

Agree that the results are great - best I have seen. Useful even at 400%, but there is a huge bug that causes the output size to be different from that requested by the user. I spoke with Topaz and they acknowledged this and I thought it would be fixed in the inline release, but it wasn't. And you cannot change the aspect ratio and resize at the same time - those might be the conditions under which the output does not match the user's requested values. But yes, a great tool otherwise.

is it possible to convert to vector? As we know, vector are better than raster when we talk about size we need

But even if you could convert to vector, you wouldn't see the improvements that Gigapixel can produce.  Eg a distant cell tower or reflector dish may be just a blur in your image, but it can intelligently produce a larger image that looks much more like those originals.  IE it is actually adding information that isn't in the original image--vectors can't do that.

Thanks John.This tool is very usefull.

Hi John, thanks for posting this info.

I downloaded trial Mac version. I made different tests. When I take a detail of a portrait picture, exemple eyes, so yes, AI giga brings a good result, better than Artis Software Super Resize that I'm using. 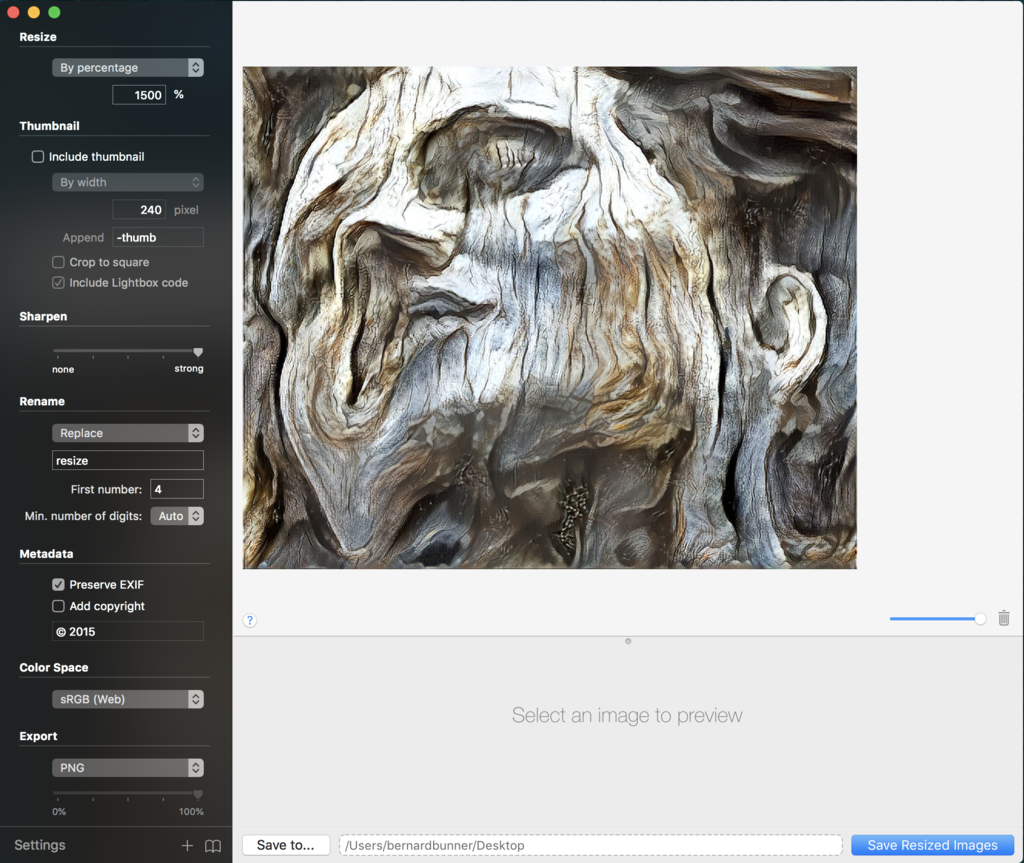 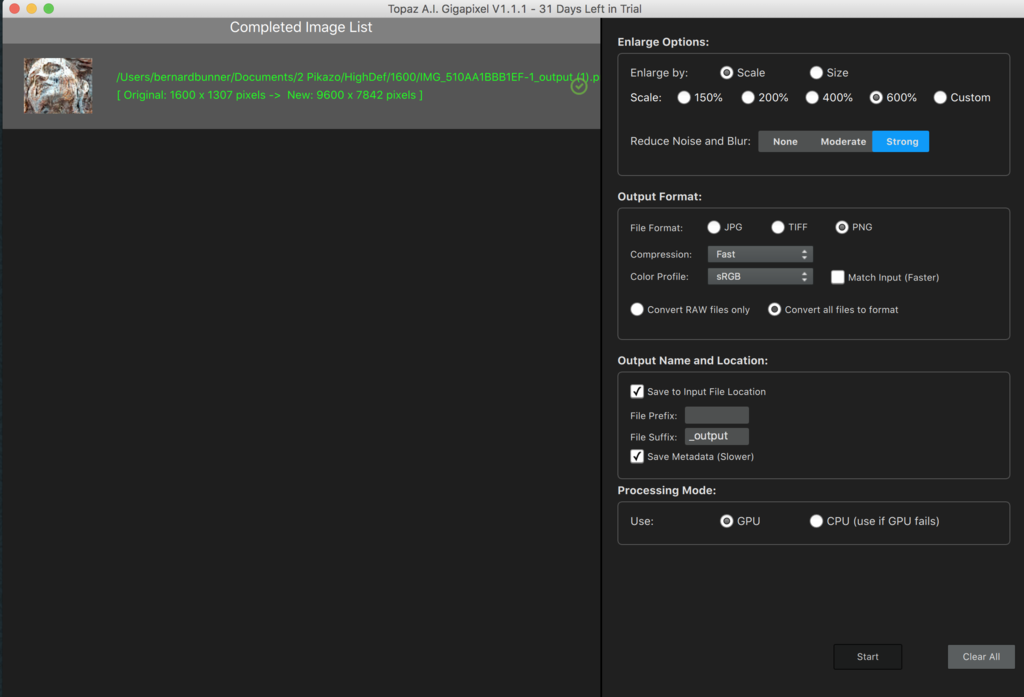 Thanks Bernard.  As long as Giga has good results, speed is unimportant to me--I'll mainly use it in batch mode while doing other things.  Also, Giga can do 1500% in two passes--first 600%, and second 250%, so there's no upper limit.  Give it a try, and see if it compares well!

The most recent Artis build is 2016 - is it still under development?

Permalink Reply by Synthetik Software on November 5, 2020 at 3:08pm

So right now is a great time for a brain dump from anyone using any 'neural net' interpolation algorithm. Either this one of the endless free implementations on github.

What do you like or dislike about the different existing implementations you are using. Anything you want to see improved?  Or made more controllable.

As you would obviously expect, we'll be moving into various neural net interpolators used for all kinds of different things in Studio Artist 6.

We're going to offer various 'standard implementations'.  But we will also be home brewing our own custom trained implementation.  So if you have feedback about what you want to see improved or made more adjustable in these systems, now is the time to give us that feedback.

Andreas take this shot in my studio, must be middle of the 90s or so. If someone'sinteresting in his awesome flashlight-technique: more infos and links via my tumblr-blog.Andreas is one of the most supercreative and multitalented guys i met...See More
8 hours ago
0 Comments

I like the refreshments and cosmetics of the synthetik-site:(The language pulldown menue to the autotranslation did not work for me on Iphone.)Thinking on corporate identity, i would like to see this stylesheets also here the SA userforum.thanksSee More
20 hours ago
0 Comments